Strong leadership and good governance supported by a strong organisational structure ensure the university can deliver great education and research outcomes for the Northern Territory. 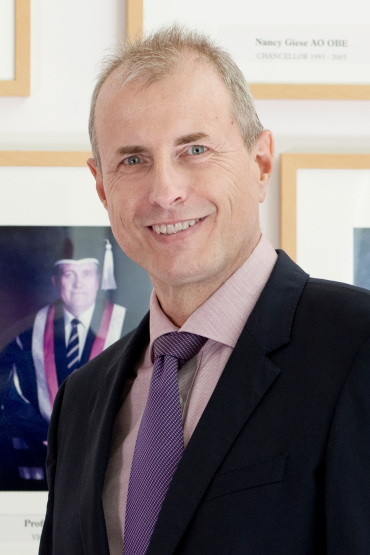 The Hon Paul Henderson AO is the fourth Chancellor of CDU.
Mr Henderson took over the role from Mr Neil Balnaves AO.

The Chancellor leads the CDU Council, the university’s principal governing body. It is an honorary position that also has a key role in supporting the Vice-Chancellor, and is significant in many university ceremonies.

Find out more about the Chancellor

Professor Sue Carthew (BSc PhD) was appointed to the position of Provost and Vice-President in July 2016. Previously  thePro Vice-Chancellor of the Faculty of Engineering, Health, Science & the Environment at CDU.

Mr Everett has worked in senior university positions in international engagement for over 15 years. Also, he has provided consultation services to universities, government and the school's sector regarding international education and training.

Professor Bogdan Dlugogorski is the Deputy Vice-Chancellor and Vice-President, Research and Innovation at Charles Darwin University. He is a Chartered Engineer and a Chartered Chemist with a distinguished record as a researcher, inventor and academic leader.

Meredith Parry is Deputy Vice-Chancellor and Vice-President Operations. Ms Parry has worked both in the vocational and higher education sectors for 25 years.

Ashar Ehsan is the Acting Pro Vice-Canchellor responsible for the Faculty of Vocational Education and Training (VET).

The Pro Vice-Chancellor for Higher Education (PVC-HE) is responsible for the six colleges of the University.

Professor Philip Seltsikas is the Pro Vice-Chancellor Student Engagement and Success at CDU. Professor Seltsikas is an internationally recognised tertiary education professional with extensive leadership experience across a broad range of portfolio areas.

From our Darwin, Casuarina and Palmerston locations down to Alice Springs and Sydney, find out what our nine campuses and centres has available to you.