Darwin was arguably one of the most influential scientists the world has known. The Program brings eminent scholars of Darwin, or of the legacy of his work such as evolutionary biology, to CDU to engage in discussion, intellectual enquiry and activities to expand local knowledge and stimulate thinking. Charles Darwin Scholars are invited to deliver an Oration on their work - the Charles Darwin Oration.

Read more about Charles Darwin at the Beagle Kiosk. 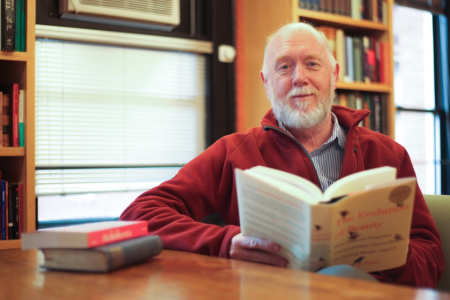 Professor David Haig, the George Putnam Professor of Biology in the Department of Organismic and Evolutionary Biology at Harvard University, USA, and a Fellow of the American Academy of Arts and Sciences, was appointed the Charles Darwin Scholar for 2020, however, due to COVID-19 his trip to the Northern Territory in May 2020 has had to be postponed. It is hoped that the Charles Darwin Scholar program will resume in 2021 and that Professor Haig will be able to take up his appointment then.

Professor Haig is an evolutionary theorist who has wide-ranging research interests, from the evolution of plant life cycles to maternal-foetal conflict in human pregnancy and specifically genetic conflicts within organisms as exemplified by genomic imprinting. Born and educated in Australia, Professor Haig has been a researcher at Harvard for over 25 years, during which time his work has received international acclaim. He is widely published in his field; his most recent book, From Darwin to Derrida: Selfish Genes, Social Selves, and the Meanings of Life, explores how the meaningless process of natural selection produces purposeful beings who find meaning in the world.