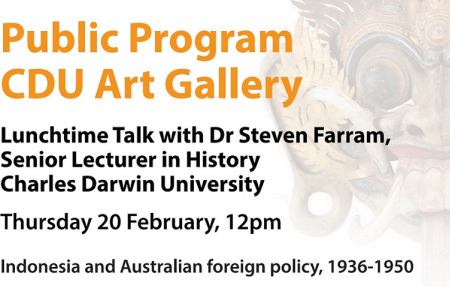 Come in and join us on Thursday 20 February, 12pm for a talk with Dr Steven Farram, Senior Lecturer in History, about Indonesia and Australian foreign policy, 1936-1950.

In 1936, when Indonesia was still a Dutch colony, Australia sent its first official representative to Jakarta. During the following years, Australians wanted to know more about Indonesia, especially after learning of its independence declaration in August 1945. That move was opposed by the Dutch and Australia kept in close contact with its consul in Jakarta to monitor the situation. Following a Dutch attack on the Republic in July 1947, Australia took the case to the United Nations and played a major role in negotiations that led to Indonesia gaining full independence in December 1949.