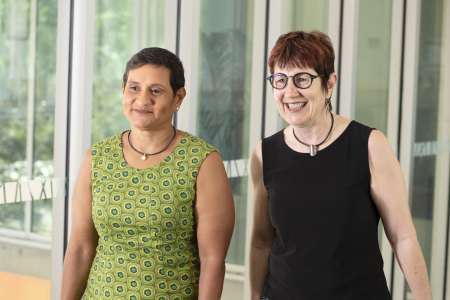 One priority, identified in South East Queensland, is to address rising rates of preterm birth, when babies are born too soon. This is also a World Health Organisation priority area, and the Northern Territory has some of the highest preterm birth rates in Australia.

“Prevention is important as preterm birth is the leading cause of infant and child mortality and is associated with preventable chronic diseases in adult life,” said Prof Kildea.

“Diabetes, cardiovascular and renal disease are all overrepresented in Aboriginal Australians.”

Together with two Aboriginal Community Controlled Health Organisations and a tertiary hospital they have co-designed services. In just four years, they have reduced preterm birth for Aboriginal and Torres Strait Islander babies by almost 50 per cent.

“This is astonishing given preterm birth rates, have not changed across Australia for Aboriginal families for over 10 years,” said Prof Kildea.

The new service is delivered in partnership between these organisations and women are coming early and often saying that it “feels safe”. It builds on research conducted in the Northern Territory, which led to the development of their innovative RISE Framework:

RISE has four pillars but only the first two were addressed in the team’s early work in the NT, which also saw significant redesign of maternity services, improved safety and quality of care, but not a reduction in preterm birth. The team think they know why and believe the RISE Framework is what has made a difference in Queensland.

“Women are allocated their own midwife and family support workers that enables the development of trusting relationships and increased ‘wrap- around care’,” said Prof Kildea.

“The partnership enables greater Aboriginal control and governance over the service so it better meets the women’s needs.”