This article appears in: Business and Accounting, Humanities and Social Science

If the experience of a growing number of enterprising immigrant women in Darwin is anything to go by, Australia is still the lucky country. Anecdotal evidence suggests that immigrant women have been running small businesses in the service and retail sectors for years, and that they are typically hardworking and passionate about what they do.

Social scientist Dr Kate Golebiowska from CDU's Northern Institute said that “a knowledge gap” and the lack of a theoretical framework to explain the phenomenon gave rise to a research project designed to capture empirical evidence.

“We wanted a research-based understanding of the scale and nature of immigrant women entrepreneurship and of how they participated in the economy, which might inform support systems for these and future entrepreneurs,” Dr Golebiowska said.

The project entailed a review of related research and an analysis of Australian Bureau of Statistics data, but a wealth of evidence also was unearthed at a workshop involving senior representatives from 18 of Darwin’s major non-English speaking communities.

“It was a discussion in which we explored topics ranging from motivating factors and how they start a business, employment scope, industry type, and so on.” It became clear that women entrepreneurs were “quite common”, that there was great variety in their activities and that many had to innovate in order to overcome various obstacles. 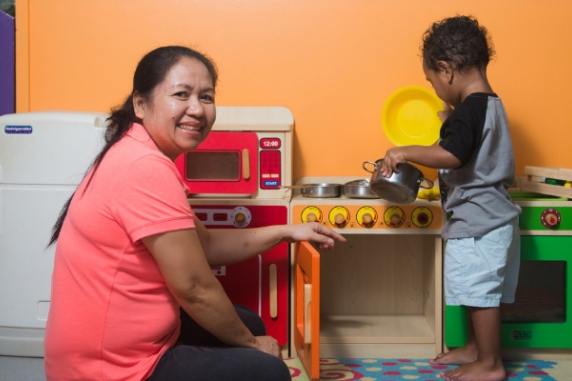 Dr Golebiowska said the most common operational sector was the food industry.

“Many prepare food for sale at the Mindil Markets or other Darwin markets, or run catering businesses. Cleaning was the next most common enterprise. In some cases, these were wife and husband teams, where the wife and her friends undertook the cleaning and the husband did the paperwork,” she said.

“Early childhood education and care was also quite common often in the form of family day care centres or babysitting services, while others worked in healthcare, including one who was a general practitioner.”

There was a migration agent, a woman from Thailand who describes herself as a business owner in real estate, and a Nepalese hairdresser who provides training opportunities to young people.

“Typically, the women were sole proprietors who started their businesses from scratch, from home, and under financial duress,” Dr Golebiowska said.

Workshop participants reported that the need to contribute to the family budget was a common motivating factor.

Typically, the women were sole proprietors who started their businesses from scratch

“We learnt that others set up businesses after having experienced discrimination in the regular workforce – possibly because of limited English language skills, although in some cases there was a perceived age issue. In other cases, they wanted to be productive during the day, or that they had been inspired by family role models (women who ran businesses) in their country of origin,” Dr Golebiowska said.

“We had one case where a woman felt encouraged by the Australian have-a-go attitude, which contrasted with attitudes in her home country, where the price of a failing business enterprise is social rejection.”

The ups and downs of running a business

Dr Golebiowska said feedback showed that running a business was great for a woman’s self-esteem, although even this had a “down side” in some families from cultures that tolerate gender disparity.

“In some cultures throughout southern Europe, Africa and Asia the work that women do and ‘their voice’ traditionally have not been perceived as important as men’s. Being a woman business owner gives them more respect and power, and a host of issues to resolve with husbands at home. Some men are not willing to accept the idea that in Australia women can become successful business operators or financially independent,” she said.

If small businesses are the engine of the Australian economy, and women entrepreneurs are an integral part of that, it makes good sense to understand how we can support and advise them and encourage others to have a go.

Dr Golebiowska undertook the study with assistance from Northern Institute colleague Alicia Boyle, and Ron Mitchell, formerly of the Multicultural Council of the NT.

“While we have answered some questions, our findings pose others that could be explored in a more substantial project,” she said.

“If small businesses are the engine of the Australian economy, and women entrepreneurs are an integral part of that, it makes good sense to understand how we can support and advise them and encourage others to have a go.”

This article originally appeared in Origins (Edition 2, 2018) and has been re-published with permission.

Trying to find a course?