This article appears in: Health, Nursing and Midwifery

One in three women experience severe back pain during labour and birth. And now, a safe, simple and effective treatment to ease the pain is here, thanks to research from Professor Sue Kildea at Charles Darwin University and Dr Nigel Lee from The University Queensland.

Until recently, sterile water injections haven’t been available in many places across the world and only in about half of Australian maternity units.

That’s about to change, thanks a study from Professor Kildea at CDU and Dr Nigel Lee from UQ. The study was the world’s largest of its kind, involving 15 hospitals in Australia and one in the UK.

“Water injections not only benefit women who want to avoid pain-relieving drugs during labour, but also women who have little or no access to pain relief during childbirth, such as those home birthing and in countries with developing health systems,” Professor Kildea says.

The technique involves administering sterile water injections (SWI) into the lower back of a woman in labour.

“We don’t know exactly why sterile water injections work, but they appear to be effective for many women," says Professor Kildea.

“Our program of research, led by Dr Lee, is helping to understand the best way to give them and how they work."

Labour pain relief for up to 90 minutes

“We found injections of sterile water were effective for relieving pain for up to 90 minutes after they were administered.

“This pain treatment is so simple and so effective for women in labour – it’s no longer midwifery voodoo!” says Professor Kildea.

She undertook the study in collaboration with Dr Nigel Lee from UQ, Professor Lena Mårtensson at the University of Skövde, a team from the Oxford University Hospitals NHS Foundation Trust, and 14 Australian hospitals.

Professor Kildea says the simplicity and safety of the procedure made it of enormous value to women both in Australia, and around the world.

“The injections have been likened to a brief wasp sting and the pain relief occurs almost immediately.

“Some early research suggested that the injections may also reduce the likelihood of a woman needing a caesarean section during labour, but our trial did not find this.” 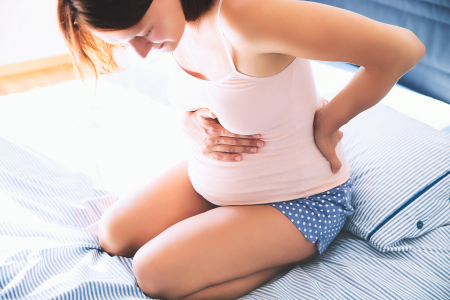 One of the major benefits of sterile water injections is that there is no effect on the mother’s state of consciousness and zero effect on the baby, explains Professor Kildea.

"The procedure also doesn’t limit a mother’s mobility or adversely affect the labour progress," she says.

“It's a simple procedure and can be repeated as often as needed."

This research provides definitive evidence that water injections offer effective pain relief for most women with labour back pain.

As part of the study, more than a thousand women in labour with severe back pain were given either water injections or a placebo of saline solution.

Twice as many of the women who received the water injections reported their pain reduced by at least half, for 90 minutes or longer.

Most drugs provided for labour pain are ineffective for back pain which may persist even after an epidural has been given.

Water injections have been shown to be simple, effective and safe, and to have no effect on birth outcomes.