This article appears in: Science

Passionate about gender equity in STEM fields and youth engagement, Alina is using her love of science to promote positive change in the Northern Territory. This Katherine local chose CDU to support her goals, and has been paying it forward to support other students and women in science ever since.

Growing up in regional town in the Northern Territory meant Alina wasn’t always exposed to the huge variety of courses and careers available to her.

“I was really confused about the career pathways I wanted to follow,” she says. “But, I always had a passion for science, especially biology, from a very young age.”

Formerly an industrial chemist, Alina's father inspired her pursuit of a career in Science, Technology, Engineering and Mathematics (STEM), alongside another high school teacher who made the biology classroom a fun space of learning.

Both figures inspired her to study a Bachelor of Science (Biomedical Science) at CDU – the power of wonderful teachers!

And as a Territory local, Alina wanted to stay close to her family, making CDU the easy choice straight after high school.

She even opted to complete one semester of her first year online while still in her home town of Katherine, thanks to CDU’s flexible study options.

From science classroom to STEM advocate 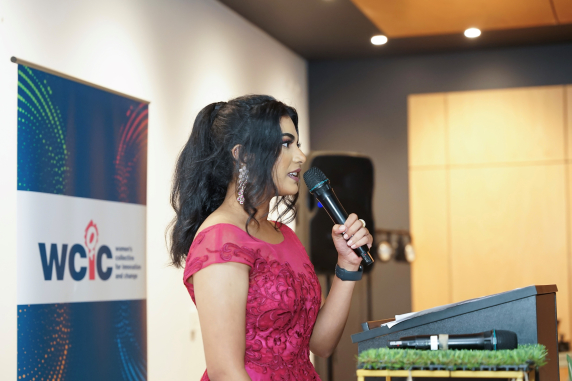 Alina found the smaller class sizes at CDU advantageous inside and outside of the classroom.

I was able to build rapport and strong relationships with all my lecturers. This really helped in finding placements and reaching out to science organisations.

Alina undertook a professional placement unit with the renowned Menzies School of Health Research in Darwin, and also had the opportunity to work as a student research volunteer at CDU’s Environmental Science Department.

Outside of the science lab, empowering and encouraging women in STEM is a subject particularly close to Alina’s heart. At the start of her own experience as a science student, Alina was already questioning her future in STEM.

“There is an evident STEM Gap in Australia, especially in the Northern Territory,” she says.

Although there are great efforts happening nationally, we have a long way to go, especially in the number of women progressing into the upper levels of these professions.

As a CDU student ambassador, Alina would go to schools to talk about getting into a STEM degree, in the hopes of providing the career inspiration for regional and remote students that she would have liked to have at that age.

“Few girls are interested in high school science subjects and enrolling in STEM degrees. Young girls and students do not have many role models that can inspire them to opt for STEM jobs.”

On a hyperlocal level, Alina wanted to provide a space to share her concerns and help other students that might have similar issues, so she co-founded the Women’s Collective For Innovation and Change (WCIC).

Many incredible events were held during Alina’s WCIC presidency, including an employability skills series to equip students with the skills to progress to higher leadership positions in their careers, a self-defence workshop, and the inaugural WCIC Ball and CDU Women of the Year Awards, among many others.

Her efforts in combatting the STEM Gap were officially recognised during NT National Science Week with an award for ‘Promoting Women and Girls in STEM Representation’, sponsored by Engineers Australia.

“It’s also great to see initiatives from CDU to tackle this issue,” she says.

Looking to the future 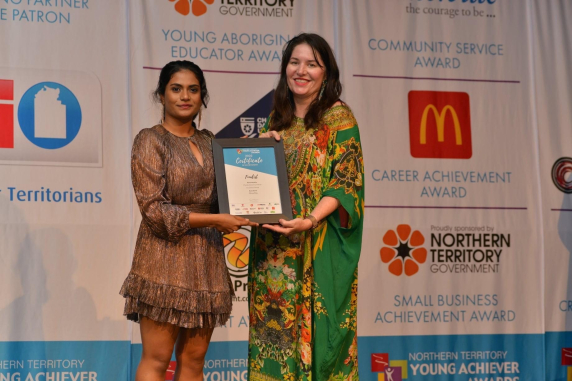 With a Bachelor of Science (Biomedical Science) now under her belt, Alina has some sage advice for current and future students.

"Generally, science degrees can be content-rich," she says.

You may have to invest a lot of time in learning and revising, but it is important to find time outside of academics to spend quality time with family and friends.

Plus, there’s more learning to be done outside of your science textbook.

“As important as getting a high academic record is, it is important to attain some transferable skills like leadership and building a network.”

With her scientific knowledge and a passion for advocacy, Alina has her eyes set on a career in health to continue giving back to her community.

“I have a long-term goal of working as a medical practitioner or public health researcher in the Northern Territory,” she says.

In the meantime, Alina is still hard at work creating change for young Territorians.

She was a finalist for the 2022 Northern Territory Young Achiever Awards and has been nominated as the NT delegate for the Young Leaders Advocates and Fellowship, putting a spotlight on the accessibility of mental health services for young people in the NT.

With passionate, scientific minds like Alina leading the way, the health of the Territory is in good hands.

Has Alina’s story inspired you to consider a career in STEM? Explore hundreds of courses at Charles Darwin University.