Building community from the ground up: Meet Jurse

This article appears in: Alumni stories, Communications and Design

Jurse has contributed significantly to the architectural and international student community. He’s successfully built up his skills and reputation in more ways than one.

Since graduating with his Bachelor of Design/Architecture, Jurse has worked as an Architectural Draftsperson and Junior Architect across the Northern Territory and Queensland.

“I’ve been involved in commercial and large-scale architectural projects from start to finish,” he says. “I’ve covered concept planning and designing, through to working with the engineering teams and ensuring projects were completed on time and under budget.”

Alongside his many study and work achievements, Jurse has most recently demonstrated his commitment to the community through co-founding an organisation called the BayanihaNT Response Team.

“I formed the organisation in response to the challenges affecting international students and temporary visa holders during COVID-19,” says Jurse. “Many of these students support themselves by working in the hospitality industry, but this was severely affected by COVID.

The organisation raised funds and organised donations from local community and businesses to assist students with finances, accommodation, food and essential items.

Building for the better

Jurse’s gift for giving shows no sign of slowing down.

He’s been President of the CDU Filipino Association, a Harmoney Soiree volunteer, and undertaken voluntary work with Habitat for Humanity Australia in the Philippines building homes for the poverty victims of typhoon Haiyan.

CDU were so supportive of me when I returned from the Philippines. The whole experience over there was traumatic and I wasn’t sure if I could return to study. But CDU adjusted my units, so I was doing less, and helped me to follow through on my dream despite the odds.

Jurse has been able to transfer the skills obtained from CDU into his career. Now working at GHD, he’s fully embracing his love of community.

“CDU taught me the importance of building relationships and how this can translate into helping others," he says.

The support that I received at CDU has made me want to pay it forward to those who are not so fortunate. 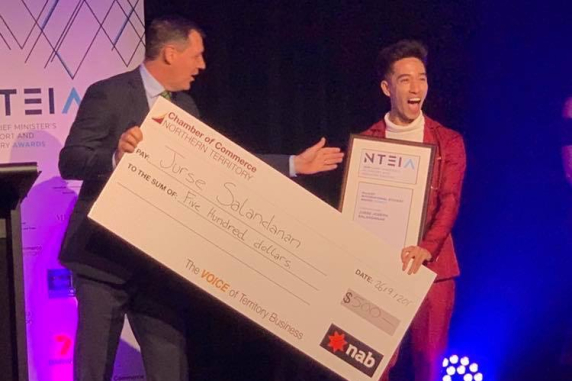 Jurse’s work has been recognised with multiple awards along the way.

He was awarded Chief Minister International Student of the Year, and nominated for CDU’s Alumni Awards.

He and his BayanihaNT team were crowned Neighbourhood Heroes in the Territory Hero Awards and were winners at the Yogan Sathianathan Multicultural Awards.

Jurse has also had the opportunity to travel overseas.

“I was lucky enough to go to Jakarta to partake in workshops where I gained hands on architectural experience which I brought back to share with my colleagues,” says Jurse. “I also represented the Northern Territory and CDU at a student congress in Christchurch.”

A word of advice

With the wisdom of hindsight, Jurse has some sage advice for his younger self.

Whatever your struggles are, there's always a silver lining. Look for the finish line and chase your goals.

"Aim for happiness because it’s everlasting," he says. "Struggles are not.”

There are so many ways to make an impact on your community. Explore our certificates, diplomas and degrees at Charles Darwin University.