Sizol's studying law to give a voice to the Territory's youth

This article appears in: Law, Pathways to Uni

As the NT Young Australian of the Year and a law student at CDU, you might be surprised to know that Sizol actually flunked Year 12. She hasn’t let that stop her pursuing her dream of becoming a changemaker and youth advocate.

Instilled with a strong passion for social justice, Sizol always knew she wanted to be a lawyer.

“I spent my whole life arguing with people at school so I thought I’d put it to good use!”

Getting Ds for her final exams, Sizol admits she spent more time being suspended from school than studying.

“Some of my teachers said I wouldn’t succeed at life,” she says. “But I knew I wanted to be a lawyer.”

Without the ATAR required to apply for a law degree, Sizol took matters into her own hands and called CDU.

“There’s a bit of shame around not getting the grades,” she says, “but CDU was so helpful and told me to enrol in a Tertiary Enabling Progam (TEP).”

Sizol used her TEP course as an alternative pathway into university, and discovered the advantages of attending a smaller, tight-knit university at the same time.

“I was really struggling with the maths class but my teacher made sure I passed,” she says.

I really felt like the teachers cared. I think that’s what I like about CDU – it feels like more of a family and more of a home. 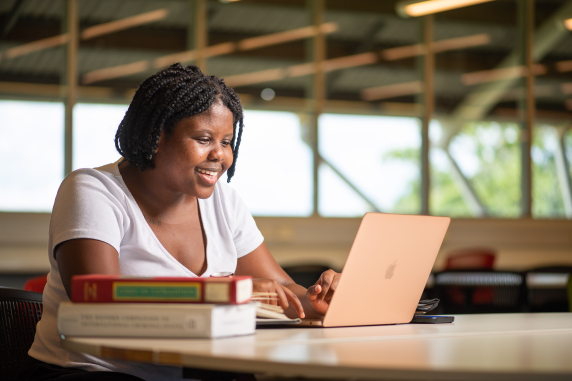 Thanks to the Tertiary Enabling Program, Sizol is now halfway through her Bachelor of Laws.

Law is an academically rigorous discipline, so she likes to make it fun for herself.

“I test myself against court cases that are happening now and put my theory into practice,” Sizol says. “I’ll analyse cases and wonder whether the ruling was the right decision – that makes it fun for me.”

"I can’t just copy from a PowerPoint – I don’t engage that way – so I get creative with it."

The legal knowledge and skills she’s picked up along the way have helped her found and run her own business.

Sizol is the founder and managing director of a youth-oriented consultancy firm in the NT called Fuyana Support.

By focusing on social, physical, emotional and psychological well-being, Sizol’s organisation aims to give the youth of the Northern Territory the support and representation that she craved at the same age.

She admits that running a business and studying is tough, and so takes advantage of CDU’s flexible study options to switch between full-time and part-time study.

“You have to stay focused and remember the end goal,” she says.

“Running my business is great, but I can do much more with a law degree. It might feel like I’m not getting anywhere in the moment, but in the long run it can open up so many doors.”

Dreams of a changemaker 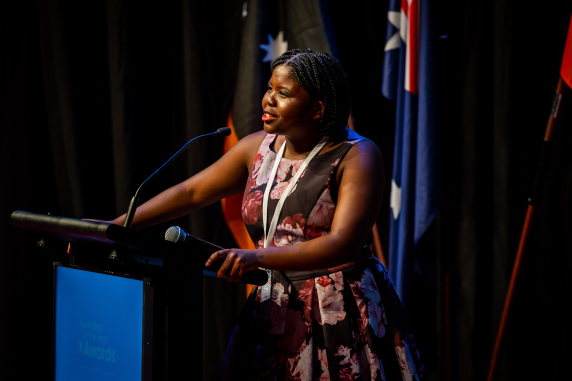 As the NT Young Australian of the Year, Sizol’s meaningful contributions as a youth advocate have been formally recognised. But she’s not done quite yet!

Once she’s graduated from her Bachelor of Laws, Sizol plans to get admitted to the NT Bar, practise for a year or two, and then open her very own law firm in Darwin.

Social justice is and will always be at the heart of her goals. Sizol’s passion for supporting vulnerable young people in the justice system is a driving motivator behind her studies and her future career.

She hopes her story will inspire young people to not be discouraged by disappointing marks at school.

Throughout my schooling I barely passed my classes, and now I’m passing at university!

“When people say you can’t do something, don’t change your goal or vision for them. Even when the circumstances you’re in don’t look like you’re going to achieve anything.”

Follow in Sizol’s footsteps and study a Bachelor of Laws at CDU, or discover our enabling courses.