The Hon Paul Henderson AO is the fourth Chancellor of CDU.

The Chancellor leads the CDU Council, the University’s principal governing body. It is an honorary position that also has a key role in supporting the Vice-Chancellor, and is significant in many university ceremonies. 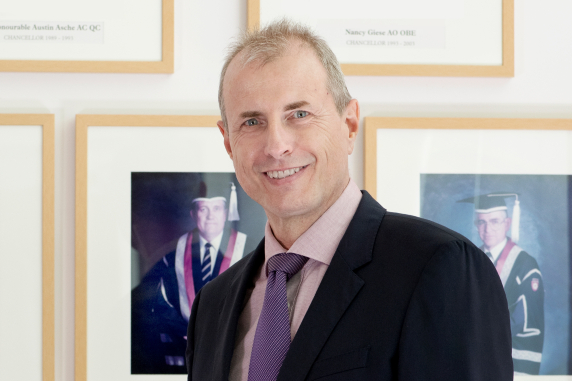 Early years: Paul Henderson was born in Croix-Chapeau, France, where his father was serving with the United States military. He was educated in the United Kingdom and studied marine engineering through the City and Guilds of London Institute. He worked as an apprentice marine fitter in Southampton before emigrating to Australia in 1982, where he worked as an underground fitter at the zinc mines in Rosebery, Tasmania.

Member of the Northern Territory Legislative Assembly: Mr. Henderson was elected to the Northern Territory Legislative Assembly in August 1999, representing the Darwin-based electorate of Wanguri. From 2001 – 2007, he was a senior Government Minister responsible for many portfolios including Education and Training, Business, Asian Relations and Trade, and Regional Development.

His Government delivered the $34 billion lchthys LNG project for Darwin, the second largest investment in Australia’s history and the largest investment by any Japanese company outside of Japan. Recognising that economic prosperity must be translated into social benefits, Mr Henderson is committed to the development of Northern Australia. He is equally focused on forging closer economic, social and cultural ties to our Asian neighbours and retains close relations with many leaders across South-East Asia.

As Chief Minister, he was instrumental in establishing both the NT Medical Program and the North Australian Centre for Oil & Gas at CDU.

Post political career: Since retiring from politics in January 2013, Mr. Henderson has co-founded and been Managing Partner of a Darwin-based consultancy focusing on business development and project facilitation.

Married to Stacey for 30 years with 3 children Alasdair, Liam and Isabel.