This article appears in: Alumni stories, Business and Accounting, Studying in Australia

Edin, from southern India, moved to Darwin in 2020 to study his Masters in Professional Accounting with CDU. With additional skills and experience on his resume, Edin’s set for success.

Edin arrived in Darwin during the COVID-19 pandemic, which proved to be a major setback. However, he was able to overcome this by shifting his focus.

“I found it challenging to secure a part-time job, so instead I gained accounting experience by volunteering,” says Edin. “I volunteered at Vinnies Australia as a retail operations officer (budgets) and at Kindness Shake as an accounting and budgets coordinator.”

On a personal level, Edin was an active member of the CDU Business Students Association and CDU’s Student Ambassador program. He was able to share his study experience with prospective students, make positive contributions to the university and get involved in activities and events. 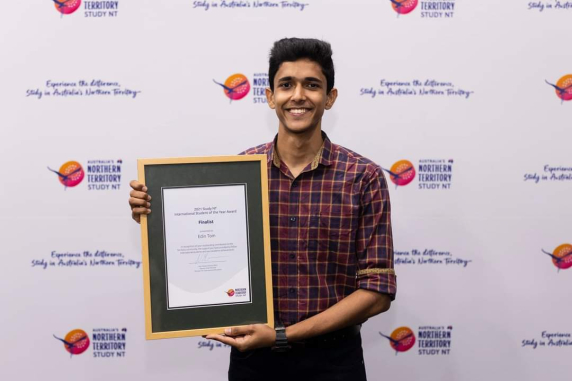 “I was appointed as StudyNT Student Ambassador representing India for the year 2021 and Student Ambassador of CPA Australia. I was also one of the finalists for the 2021 StudyNT International Student of the Year Award by the Northern Territory Government,” says Edin. “It enabled me to extensively widen my social connections and network with other ambassadors, employers, and international students.”

One of Edin’s proudest accomplishments is an initiative he created with friends called ‘Act Now Save India’ where money was raised to help Indian citizens during the second wave of COVID-19.

“In collaboration with BCC Cinemas Casuarina, we organised a movie screening and raised money through selling tickets and raffles,” says Edin. “We were able to donate this to India, via Caritas Australia, and CDU extended their support throughout the event.”

Ticking all the boxes

The unique outback and nature experiences, namely, Berry Springs and Litchfield National Park are my absolute favourites, he says. Descending the stairs to swim in the clear waters of Florence Falls and getting lost in the beauty of nature are blissfully stress-relieving. The public parks, off-roading adventures, jet-skiing and the abundance of other adventurous activities mean I’ll never be bored.

The appeal of CDU was just as strong.

CDU offers relatively smaller class sizes to allow for a much more engaging learning experience,” says Edin. The educational support initiatives and the scholarships available allowed me to focus on my studies and be proactive in university activities without having to worry about the financial struggles. 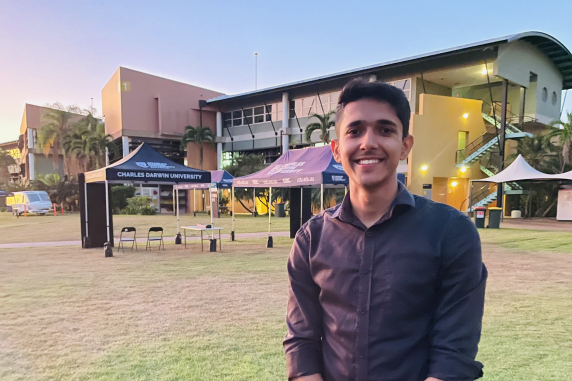 Edin interned with multiple companies during the semester breaks to apply his academic skills in a real work setting. He did a 300-hour placement, a course requirement of CDU, which resulted in his full-time position.

Studying Master of Professional Accounting at CDU broadens your career opportunities and sets you up for success by opening doors to reputable and prestigious global companies through CDU’s established industry partnerships. Currently, I am working as a finance officer in one of the colleges in Darwin, which have paved way to my dream of working in a management accountant role, he says.

“I encourage all new students to proactively apply for internships and vacation programs and build the interpersonal skills to be job-ready once they graduate."

In addition to this success, Edin has continued to be active in different initiatives across different organizations in Darwin, including sitting as a board member for the Young Professionals Rotaract NT.