Through the New Colombo Plan, Joel was given the once-in-a-lifetime opportunity to study abroad and complete various internships overseas while completing his engineering degree at CDU. The experience both improved his career prospects and gave him the chance to visit many Indo-Pacific nations.

In the third year of his civil and structural engineering degree, Joel made the life-changing decision to study abroad and apply for the New Colombo Plan (NCP) Scholarship. The NCP is an Australian Government initiative designed to build relationships between Australia and other countries in the Indo-Pacific region.

He had previously spent time living in the Indo-Pacific region, which influenced his decision to apply for the scholarship. “With so many large scale engineering projects going ahead in Asia, the opportunity for professional development was very promising,” he says.

“Australia’s influence in the region depends on professional and personal relationships and I wanted to be part of strengthening these relationships.”

For Joel, the best part of his experience was travelling between nations. “The best part about NCP is the opportunity to be adventurous," he says.

The NCP scholarship is the perfect opportunity to live a traveller’s lifestyle. I generally went away every month and had a go at many different activities.

Joel was pleasantly surprised by human connection; the way that humans can relate to each other, despite coming from different societies. “The shared humanity makes home seem closer than you expect," he says.

No matter where you go, a smile sets people at ease, sharing food is a social ice-breaker, and laughter doesn’t require an interpreter.

While Joel took some time to form genuine connection with locals during his study abroad experience, he worked hard to build his network and found his feet among peers at the university student clubs. “I struggled in the first few months connecting beyond acquaintance levels,” he says. 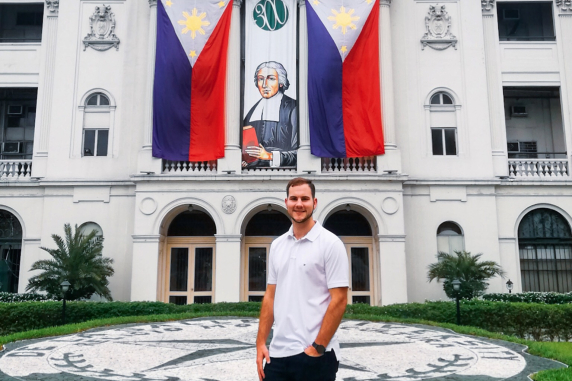 This changed when he formed a strong connection with like-minded student volunteers in the universities’ international students club. “They made sure I was comfortable in university and getting involved in social events outside of study,” he says.

Being thrust into a new environment while studying abroad is challenging. I learnt that human nature can overcome these challenges and even thrive in unfamiliar circumstances.

Joel’s advice for anyone thinking about travelling elsewhere within the Indo-Pacific region to complete a portion of their study? “Go for it," he says.

There is absolutely nothing to lose and everything to gain by living, working and studying overseas.

“Australia is just a small part of a region that has so much to offer.”

At CDU, you can study abroad at more than 40 universities in the Americas, Europe and the Asia Pacific. Plus, scholarships are available to support your studies. Learn more.