This article appears in: Alumni stories, Communications and Design, Creative and Performing Arts

Creativity and education are empowering Jonathon to draw conclusions about his future. He pictures ongoing success, and based on his current achievements, he won’t be wrong.

Jonathon is a Darwin-based Indigenous illustrator with talent at his fingertips. As a 2D animator and writer he combines his passion for the arts with striking messages of morality, identity and heroism, all set against an Australian backdrop.

Since completing his visual arts degree, Jonathon has achieved some amazing things. With several accolades already attached to his name, his fusion of comic books and activist artwork is certainly turning heads.

As a proud member of the Woppaburra people of Keppel Island in Queensland, Jonathon is an advocate for Indigenous arts and culture in the Northern Territory and beyond. His art and professional roles support, inspire and contribute to Indigenous communities in a culturally meaningful way.

Jonathon’s studies through CDU have contributed to this significantly.

“I've been artistically driven since I was young and always knew that I wanted to make a career working as either an artist or doing illustration,” he says.

“Learning the fundamentals of arts in an academic setting felt like the proper path to take and CDU’s course content was perfect.” 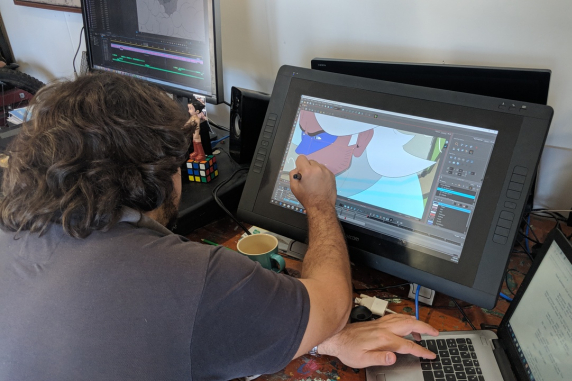 Since graduating Jonathon has been treading a path to success.

His work has been featured in exhibitions nationally and internationally, and with funding from Screen Australia, he produced an animated TV series Zero-Point featuring an Indigenous hero from Darwin.

The mini-series won several awards including Best Animation from The Capricornia Film Awards and the Best Sound Design and Official Selection from Animation on Vegas Movie Awards.

"CDU provided the foundation for me to develop my style and build on my initial idea to create Zero-Point," he says.

Having lecturers who were practising artists themselves gave me a greater understanding of the art world and their guidance was invaluable.

Combining passion with education has opened up a world of opportunities and experiences for Jonathon.

“As Resource and Development Support Officer, my work is focused on supporting Indigenous art centres and artists through leadership.”

Knowing what he knows now, Jonathon's advice for his younger self rings true for anyone considering starting or returning to university.

I’d tell my younger self not to wait to follow your passion.

"If you know what you want, get in and do it. I only wish I did it sooner.”

Unleash your natural talent with a creative arts degree at CDU, tailored to your interests. Explore courses.