Sabaratnam’s passion for educating young engineers and helping others has made him an integral part of the community. His selfless nature has earned him respect and admiration.

Sabaratnam has been heavily involved with community activities around Darwin for almost 40 years and is a two-time graduate of CDU with an accounting degree and teaching certificate.

As an active member of the community, Sabaratnam has developed several initiatives that focus on equality and inclusivity in the greater Darwin community, including the development of the Hindu society and its temple.

Working as a qualified engineer, Sabaratnam was keen to further his education and skills to widen his career opportunities. It was a move that paid off.

“I’d done some accounting in my previous studies and wanted to back this up,” says Sabaratnam.

“I knew that finance knowledge would be useful in any field and teaching has always been a passion."

The CDU courses were appealing because of their flexibility and the smaller class numbers which made it easier to get help. 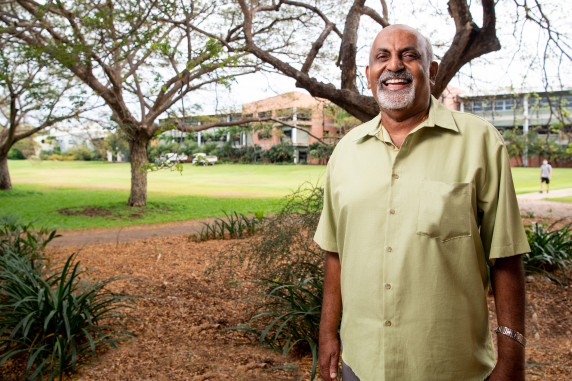 Sabaratnam has spent over four decades teaching and inspiring young engineers. Even while working in high pressure roles for the Northern Territory Government, he continued to teach part-time.

His career spans CDU's unique history, and Sabaratnam has contributed to each stage of its evolution. He lectured in Civil Engineering at Darwin Community College, became Head of Department of Civil Engineering/Surveying at Darwin Institute of Technology and later Deputy Vice-Chancellor (VET) at Northern Territory University, and is now CDU’s Associate Professor of Engineering.

The relationships he formed at CDU helped prepare him for teaching others.

“At CDU I had great interactions with the staff and did a lot of networking,” says Sabaratnam. “As a mature age student, I had the opportunity to interact with young minds who have new ideas and different ways of thinking and that’s helped me teach and communicate with students today.”

Sabaratnam is an active member of over 50 committees and local groups that focus on the development of the community.

He’s passionate about supporting refugees and the under-privileged and has long supported Amnesty International and World Vision. Closer to home, Sabaratnam almost single-handedly secured funding and project managed the construction of a Hindu temple and community hall in Malak, located in Darwin’s northern suburbs.

However, for Sabaratnam one of the things he’s most proud of is his students.

The construction industry in Darwin and beyond is full of engineering graduates that I’ve taught and these students have elevated the standard of engineering in Australia.

If he could go back in time, Sabaratnam would offer his younger self the following advice.

“Manage your time well and do a little bit of work every day so you don’t feel stressed by deadlines. Maintain a good work life balance and interact with other students because you can learn so much from them.”

Sabaratnam received the Alumnus Award for Community Service at the CDU Alumni Awards. Nominations are now open for 2022.

Build your new world with an engineering degree at CDU. Explore courses.