Joelene Puntoriero is a great role model for her two-year-old daughter. Juggling parenthood while studying a degree in Environmental Science has set her on the path to success.

Her degree is helping her improve her career prospects (and others do the same), starting with her work as an academic coordinator for the Young Indigenous Women’s STEM Academy run by CSIRO.

Low ATAR no barrier to ambition

When Joelene finished year 12 with a low ATAR score, university seemed like an impossible dream. But driven by ambition, she enrolled in the preparation for tertiary success program at CDU as a gateway to study.

“While studying the enabling program, I was engaged in a national youth Indigenous leadership program where I walked sections of the Larapinta Trail in Alice Springs and the Kokoda Track in Papua New Guinea,” says Joelene.

Learning on the land

Joelene has experienced many highlights whiling studying environmental science. However, standouts include learning how to use a throw-net for fish surveys, studying fire ecology and management and having the opportunity to work with weed scientists’ and Aboriginal communities on the invasive aquatic weed Salvinia molesta in Kakadu National Park.

“Going off campus really enhanced my study experience,” says Joelene. “I completed a unit on desert field ecology. It was by far one of the best experiences I’ve had.”

Study isn’t without its challenges, but Joelene successfully balanced work with study and pregnancy. At 27 weeks pregnant, she completed a three hour exam and now credits her daughter for keeping her on track.

I deal with tasks by making the time and doing them. I used to really struggle with procrastination but now with my two-year-old I literally don’t have the time to procrastinate. I make a ‘to do list’ and do it.

Do you research, she says

For people considering study, Joelene recommends talking to people working in the field you’re interested in, volunteering to gain realistic work experience, and reaching out to your preferred university to discuss the course.

“Speak to a lecturer from the faculty you’re interested in and gain advice on course and study options that would best suit you,” says Joelene. “Remember lecturers are people with families too, so they understand competing priorities and unavoidable circumstances when studying.” 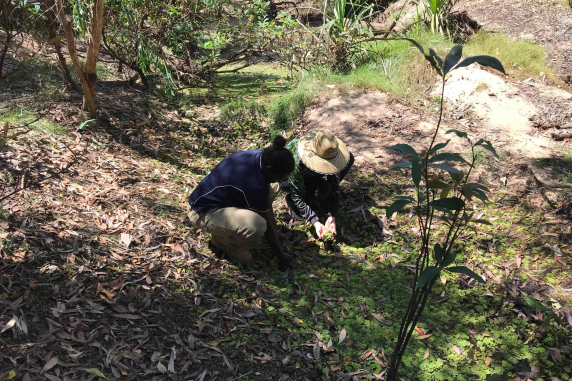 Forging a career in Environmental Science

Since graduating, Joelene’s career has gone from strength to strength.

Initially she accepted a position as a Grants Agreement Manager for the National Indigenous Australians Agency, working on country and Indigenous ranger grants in the Arnhem Land and Groote Eylandt regions.

I applied for an incredible opportunity with CSIRO, as the Academic Coordinator for the Young Indigenous Women’s STEM Academy. My bachelor’s degree in Environmental Science and experience as a Youth Development Officer for the Duke of Edinburgh’s Award NT prepared me well for the role.

“I was also invited to attend the NT Women in Innovation and STEM Network Committee Meeting, the first of its kind.”

Looking forward (and back)

In the future, Joelene plans to enroll into Honors with the aspiration to then complete a PHD.

And asked what advice she’d give her younger self about university?

“I would say just make the time to go to university. Don’t put it off,” she says. “Don’t worry about making mistakes. Instead, learn from them. Pick yourself up and keep on moving forward.

“Always remain humble and take the time to thank every single person who has made the time to help you along your journey, that includes family, friends, lecturers and mentors.”

Start your career in Environmental Science with a degree from CDU. Explore courses.