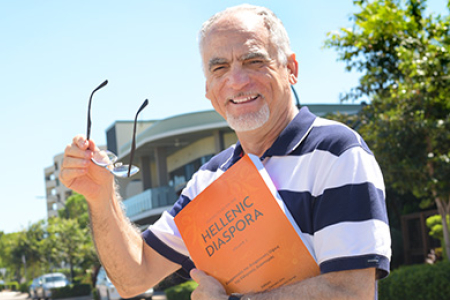 He is the coordinator of Greek and Hellenic studies at CDU and CDU’s Greek In-Country Program and each year, since 2007, accompanies students to Greece for an intensive three-week study course. He currently teaches Modern Greek Language and Greek Literature at Charles Darwin University where he specialises in literary studies, Modern Greek Literature, immigration of Greeks to Australia and their oral history. His main project currently is the collection and publication of stories of Hellenes in the Northern Territory. He is also developing online teaching courses of Hellenic Language and Culture through the use of new technologies, and in the creation of computer-based programs for the teaching of language in all forms through distance education.

Associate Professor Frazis is available to supervise research students who are interested in the topics below:

Prospective students who have interests in those topics are encouraged to contact Associate Professor Frazis for further information.