'There is help wherever you turn': Kenisha on studying after kids

Indigenous woman Kenisha never imagined she'd become a lawyer. But, after having two kids, overcoming family challenges and living all over Australia, she's studying law at CDU. And now she's emerging as a leader in her community. Here's her story.

Kenisha, or Mili as she is known, never imagined becoming a lawyer. Having spent most of her childhood on Elcho Island in Arnhem Land, Mili attended a private school in Sydney and traveled the country extensively before returning to Darwin and studying law.

Her next few years flew past with a number of family commitments and having two sons of her own. It wasn’t until they were approaching school age that she considered starting a law degree.

"I did not even think about becoming a lawyer when asked back in my childhood years," she says. 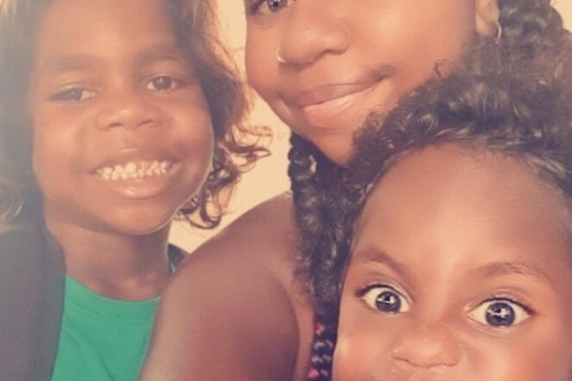 Help when you need it most

Having initially chosen CDU because it was "closer to home", Mili couldn’t be happier with her choice.

I love the atmosphere at CDU. There is help wherever you turn.

This help has been there when Mili needed it most, supporting her through stressful periods.

"There have been a few years in the past which have been very challenging for me", she says. "There have been family deaths, family members being admitted into hospital due to serious illness, and challenges of studying for exams or doing assessments while having young kids in the house."

With the support of CDU, Mili has taken these challenges in her stride. And through access to invaluable support services, she has been able to keep studying at her own pace. 'As an Indigenous law student, the CDU Indigenous Support team is very helpful and is always there if you need help with anything at all.’

Gaining extensions on assignments, withdrawing from units and counselling are just some of the services that Mili has accessed during her time at CDU. "Great lecturers, awesome space and friendly students. I love studying at CDU," she says.

As a proud single mother, her advice to other mums considering a return to study is simple.

Come and study at CDU. You will get the help and support you need.

As an Indigenous role model, Mili has retained strong ties to her community whilst also studying to support their interests.

I never thought that I’d be studying towards becoming the first Yolngu qualified lawyer.

In addition to studying, Mili has taken part in the Student Ambassador Program and is currently working at the North Australian Aboriginal Justice Agency (NAAJA).

In her role as a community legal educator, she is gaining invaluable experience whilst also building a better future for the indigenous community. "My job involves travelling into remote communities to help facilitate and deliver legal sessions and workshops," she says.

These workshops focus on translating current Australian law within the community, and helping members navigate the legal system should they require support. "We also help Indigenous people around bush court sittings. We help clients speak to the NAAJA lawyers, write support letters for clients and give updates to families about the client," she shares.

While Mili admits to "surprising" herself with how well she’s adapted to studying, she is well-deservingly optimistic about her future. After completing her Associate Law degree, she plans on starting a Bachelor of Laws.

A bright future is certainly ahead for Mili. And while she’s undecided on the area of law she’d like to focus on in the future, she has the world at her feet.

"I would like explore and learn about different areas of law through my studies at CDU before choosing what area I want to focus my future on," she says.

Trying to find a course?