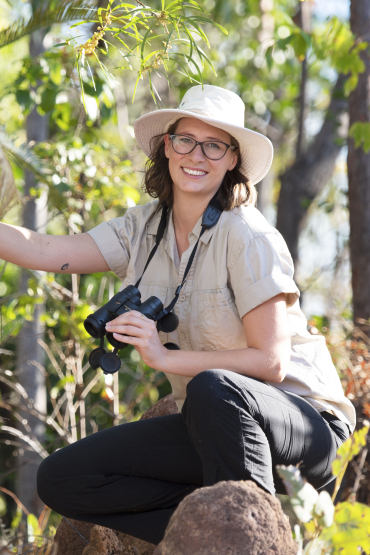 Widespread declines of small, arboreal mammals in the drier regions of northern Australia are of global concern. These declines have been variously attributed to either disruption of resource availability or increased predation pressure from invasive species. The aims of my study were to identify the factors that influence the distribution, abundance and ecology of an arboreal marsupial, the savanna glider (Petaurus ariel) in the tropical savannas of northern Australia; including whether this species is in decline. This study forms the first targeted ecological research on this species, which was formerly considered a subspecies of the sugar glider, P. breviceps.

This research reveals significant variation in the abundance and ecology of P. ariel across its geographic range within the tropical savannas. It was found that the dramatic north–south climatic gradient within northern Australia has an overarching influence on the distribution, abundance, density, home range size and fine-scale habitat use of P. ariel. Interestingly, there was a 50% increase in P. ariel body mass and a ten-fold increase in P. ariel home range size in areas of low resource availability. The variable ecology of P. ariel has enabled the species to adapt to varied environmental conditions, including areas of naturally low resource availability at the southern edge of the species’ distribution. Importantly, this research shows evidence of a 35% decline in the geographic distribution of P. ariel, primarily in the southern end of its geographic range; emphasising the need to understand fundamental aspects of the species’ ecology for future conservation efforts.

Overall, this research highlights the influence of variation in resource availability on an arboreal marsupial in the tropical savannas of northern Australia. The thesis contributes to our understanding of the drivers of the ecology of this, and other, arboreal mammal species inhabiting the region, and helps explain underlying patterns of decline.

Alyson’s broad research interests are in terrestrial ecology, including landscape ecology and community ecology. Alyson was awarded her PhD in May 2019. Her thesis sought to identify the factors that influence the distribution, abundance, and ecology of the savanna glider (Petaurus ariel) in the tropical savannas of northern Australia. Alyson has since worked as a postdoctoral researcher for the Northern Territory Government and within the NESP Threatened species Recovery Hub at Charles Darwin University. In these roles she used large datasets to model predictors of small mammal decline in northern Australia, and patterns of native prey consumption by Australia’s most invasive predators, the feral cat and red fox. Alyson has recently commenced work as a Postdoctoral Research Fellow at CSIRO in the Land and Water team based in Darwin. Alyson is part of a team working to develop biodiversity indictors for northern Australia’s tropical savannas from remote sensing products.