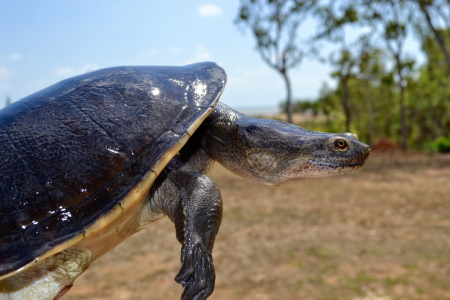 Growing community concerns have prompted a PhD candidate from Charles Darwin University, Isabel Ely, to take a closer look at the health of the Finniss River food web and whether the wetland’s freshwater turtles remain safe to eat.

The Finniss River floodplain Long-necked turtles have been hunted and eaten by the local first nations people for a long time. The turtles, at least historically, were an abundant and nutritious food source that are traditionally collected by women, who often use poles to stick into the mud, feeling for the hard shell of a buried turtle.

Recently, local hunters have noticed that the turtles seem to have become more difficult to find and their meat appears to look and taste different.

“I am going to be testing turtle meat to determine what, if any pollutants, might be affecting their population numbers - and to see how safe they are to eat.” Ms Ely said.

A preliminary test of four turtles has found presence of heavy metals, which in high concentrations can be toxic to humans and turtles alike. Ms Ely suspects that the old Rum Jungle mine site, upstream from where the turtles are being collected, may be the cause.

“The Finniss River has been polluted by the mining operations at Rum Jungle mine site at the top of the catchment. The mine was active from 1953 to 1971, leading to the drainage of heavy metals to the river and possibly the floodplains” Said Ms Ely.

The Rum Jungle Mine Site ceased operations in 1971 and has been closed ever since.

Investigations into the mines impact and attempts at rehabilitation have been conducted since the 1980s, but there is more work to be done on the possible exposure of toxic metals to aquatic organisms and to humans living in the area who consume local bush tucker.

“This has resulted in a lack of information on the impact of the mine to the Kungarakan, Maranunggu, Wadjigan and Warai peoples, the Traditional Owners living in the area” said Ms Ely.

The turtles are not only an important food for many locals but might also fill a key nutritional hole in their diets.

“There is concern that there are not many good sources of iron in the diet of the Aboriginal communities in the NT, but our early results indicate that turtle meat is very high in iron. My project will try and determine how available all that iron in the turtle meat is to those who eat them.” Ms Ely said.

As well as investigating the possible pollutants and iron availability in Finniss River turtle meat, Ms Ely plans to build a food web of the entire Finniss River to understand the biogeochemical cycle of metals and the exposure of these metals to aquatic organisms.

“The carnivorous Long-necked turtle will be at the top of the food web I will build, with the fish, plants and smaller critters they consume weaving below.” Ms Ely says.

The food web may also provide insight into other animals that may be affected by mine pollution, transferring the contaminants to the turtles when the turtles feed.

The Rum Jungle Mine site is flagged for further rehabilitation of the Finniss River, but in the meantime, we need to keep an eye on what effects it’s drainage is having on the floodplains.

“A healthy floodplain will continue to provide the nutrition this local community has been relying on for generations.”

Isabel Ely’s PhD project is being completed at the Research Institute for the Environment and Livelihoods (RIEL) at Charles Darwin University, under the supervision of Professor Stephen Garnett, Dr Larissa Schneider (ANU), Dr Carla Eisemberg, and Dr Vinuthaa Murthy. The project is supported by the NT Government and AINSE Ltd. Postgraduate Research Award (PGRA). Isabel has been working with the Maranunggu, Warai, Kungarakan and Wadijagan peoples.