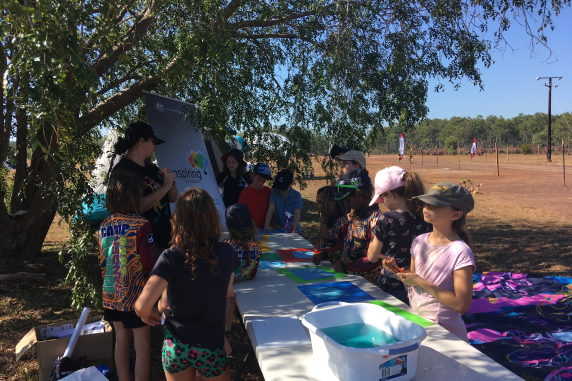 It was bright and early as Inspired NT’s Carla Eisemberg and I threw our camping gear in the car. We were off to Wagait Beach for the 2020 Kenbi Ranger Junior Culture Camp. The camp is a 2-day affair, full of fun and educational activities for the 50+ kids who attend. As part of the Kenbi Ranger Group’s cultural and community engagement commitment, the group had the site looking its best, with activities being coordinated by the Northern Land Council’s Nicole Brown. The camp is a chance for Indigenous and non-Indigenous kids alike to learn about culture, caring for country and make great friends. As we drove from Darwin, Carla and I strategized about how to make our science workshops as fun and accessible as possible for the kids.

Our first activity made use of a resource readily available at the Territory: sunlight. We began by making simple photos of our hands sun using special paper that reacts with the sun. The key was holding still long enough for the paper to react, so the message was that scientists need to be patient. One of the kids exclaimed, “I think that science is fun AND boring”. Never has a truer word been spoken! The next solar powered activity was to put together small grasshoppers with a small solar panel which made them shake in the sun. Most of the kids had seen solar panels on their houses or schools so the grasshoppers were a real hit. Everyone raced the grasshoppers using the sun and shade to control them. Solar power is a growing industry in the Top End which could lead to employment opportunities in the future. 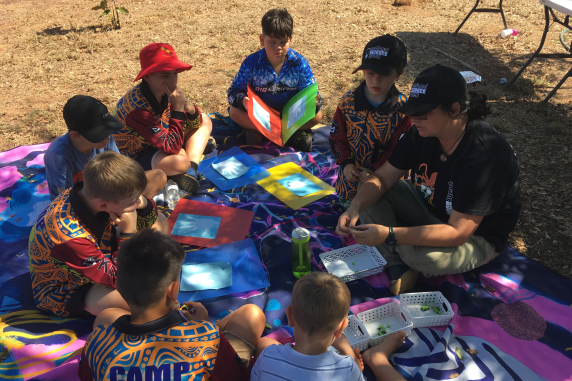 Our second workshop involved launching catapult rockets and trying to get the parachutes to open as they fell. I was impressed by how enthusiastic and interested the children were throughout the day. We talked about how it is ok to make mistakes and that is how scientists learn. I was surprised when a young girl said, “I wasn’t born to be a scientist”. She argued that Einstein was born a scientist because he was super smart. I explained that most of us just learn how to be scientists and anyone can do it if you are interested. We had lots of similar conversations throughout the day so I hope that the kids left the camp feeling like a career in science is something they can pursue.

In the evening, Rohan Fisher, from RIEL, shared 3D fire modelling. The light from his projector shone over a pile of sand, which the kids arranged into a 3D topographical map. Rohan explained how fire can be used to care for country using a model which showed how fire moves across the land under different conditions. The kids had a chance to light pretend fires across the map to see what would happen. Their approach to land management seemed to involve some over enthusiastic fire burning!

Representatives of several organisations also ran other activities during the camp. The Larrakia Rangers had everyone collecting ecological data, while the Department of Agriculture explained the problems caused by feral animals. Crocwise taught us about crocodile ecology and how to be safe in crocodile country, and Kenbi Rangers demonstrated controlled burning. Spear throwing was a firm favourite with many of the kids! The camp participants obviously had a great time and headed home tired with big smiles on their faces. I think that they learnt a few things about science along the way too!